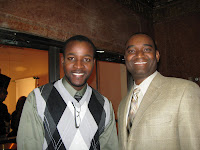 The Paramount Theater was filled with people eager to express their concern for others with ties to Haiti. Some were brimming with gratitude to have recently learned their loved ones were found, while others continue to hope.
Meanwhile, musicians, singers, dancers and poets took to the stage. First photo, on left Stanley Joseph, 23, of Asbury Park was born in St. Marc, Haiti and emigrated here at 16. He is now a junior at William Paterson University. Tonight he read poems from his two books: "Tears of a Despaired Heart", a collection of poems about injustice and immigrant suffering that is carried by Barnes & Noble, Borders and Amazon, and "Endless Struggle," poems dealing with the history of Haiti, which is coming out in the fall. http://www.livingforpoetry.com/ To Joseph's right is singer Villaire Pierre of Irvington, who sang 'Stand by Me' and 'Thank You'.
Pierre said his parents visit Haiti each winter and were two hours from the capitol, Port-au-Prince, where the quake hit. Joseph said most of his father's relatives live in the capitol city and have not been heard from yet. 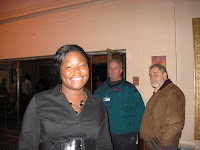 Linda Raoul, 25, born and raised in Asbury Park, is smiling broadly since her three cousins, buried under rubble when their school collapsed in the quake, were all rescued and her mother's brother was just found today -- a week later. Her family had no other details yet. "We were worried," she said. "But we believe in God." Raoul is a a social worker with her masters degree, who formerly worked for the Mercy Center, and is looking for a placement now.
In background in the tan jacket is Tony Nuccio, the city's social service director. Nuccio pointed out the long row of paper and plastic bags of clothing and food people have donated. The problem he has now is getting the donations to Haiti and then to people who need them. He said he may suggest that the supplies be kept here in anticipation of refugee needs.
Attendees said Councilmember Sue Henderson spoke at the event.
Karen Lee, band and music director for Asbury Park High School, said many of her students had missing relatives due to the quake and were understandably upset all week. She was hoping to get good news when the schools reopen tomorrow. 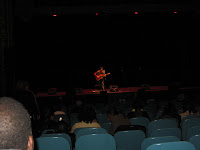 A solo guitarist, Doug Mikula played guitar, later joined by vocalist James Peacock, both from the band "That's How They Get Yah!" 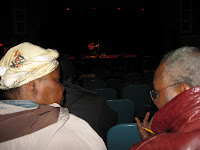 Pastor Florival watches the show, which was arranged by the NJ Haitian Coalition. http://www.njhaitiancoalition.org/ "I'm glad to be able to be here tonight to honor the memory of Dr. Martin Luther King and also the lives of so many people who perished in the dire situation in Haiti," said Florival. "I want to thank the Paramount Theater for allowing us to have this big event here." The pastor said he also wanted to thank the community for their support and concern for those suffering in his homeland. "The situation is terrible in Haiti, but we have hope," he said.