Choirs of heavenly voices joined the chorus of charities and officials, including a congressional rep, vowing to rebuild quake-devastated Haiti last night at the Paramount Theater in Asbury Park. 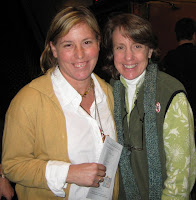 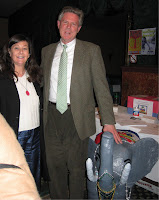 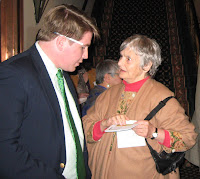 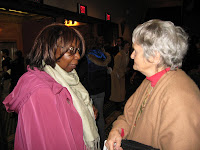 Only the stone-hearted could fail to react to Marc Steiner's documentary of the journey to Haiti recently undertaken by he, Pastor Sony Augustin and Langosta Lounge co-owner Marilyn Schlossbach just last week. Steiner captured both the courage and the plight of dozens of orphans and displaced Haitian children, some wearing crisp blouses and matching ribbons in their hair despite their ravaged surroundings; roads wiped out, government buildings, churches and orphanages that had pancaked spreading a ghostly gray dust over the lush siena-colored soil.

Augustin guided the group and described for them the very different environment in which he grew up, and made it clear that the country sank into poverty after his generation and long before the quake. Schlossbach (pictured with Cindy Zipf, founder of Clean Ocean Action) spoke directly, and makeup free, to the camera about the overwhelming nature of the need, her desire to help and the reality of already juggling many obligations she had back home. (Schlossbach and her husband are opening a new restaurant, The Pope and Trinity, formerly the Mattison Park, on April 1.) And she described her amazement at the resilience of the Haitians she was meeting each day. Despite the chaos all around her, Schlossbach had already set out a priority for how she would help; she would work first to build an orphanage to help house the children, most of whom are still sleeping on the streets or in tents. Later, Schlossbach told Asbury Radio Pastor Scott Hoffman of St. Pauls United Methodist Church, who built an orphanage in Haiti prior to the quake, has agreed to operate things on the ground there, such as sheperding building supplies.

The district's Democratic Congressman, Frank Pallone (pictured with award-winning artist/educator Jean Johnson, whose APHS art students created the elephant sculpture to raise donations) pledged long term support for the country. Pallone [Correction: Pallone used to sit on the House's immigration committee. Currently he serves on the Energy & Commerce Committee.] The signficance of the Democrat's appearing with the popular symbol of the Republican Party drew laughs from bystanders.)

Tom Hayes, who directs community outreach for the NJ Natural Gas company made a brief appearance (pictured with Ellen Carroll of the Coaster, Cindi D'Onofrio, director of the AP Chamber of Commerce, and Karen Schwartz Music Director of APHS) to lend support. NJNG has a long legacy of charitable work in the City. Hayes and his wife, Regina, personally saved the home where Stephen Crane grew up, by buying and maintaining it as The Crane House. They eventually sold the house for a nominal amount to Frank D'Alessandro, the 4th Avenue home's current steward. Sadly, after Hayes had left the theater, the audience learned that one of Hayes' sons has been diagnosed with Leukemia. Asbury Radio sends its best to the Hayes family and to their son for a full recovery.

Maureen Mulligan, head of Habitat for Humanity in Asbury Park, a representative of the Red Cross, Johnson, and Eve Silver, the City's Latino and relocation specialist, joined Schlossbach on the stage. Silver performed a song about loss and hope that she wrote in Spanish, singing it a capella. (She did a beautiful job!) Mulligan said Habitat of AP plans to build two more houses in Haiti, in addition to others being built there by her parent organization.

Pastor Florival of the First French Baptist Church, AP, whose choir performed, invited the mayors of Neptune or Asbury Park to the podium. Neither mayor responded, so former Mayor Randy Bishop accepted. Bishop said unlike other disasters that seem a world away the Haiti quake has brought the tragedy right next door and rallied the Neptune and Asbury Park communities to stay with the rebuilding effort to the end.
Madison Marquette Hosted the Paramount Theater facilities for the event.