The Sheriff's Sale of the hi-rise residential development site known as Esperanza, which occupies a solid block of prime waterfront in Asbury Park, was postponed yesterday, December 13th, until January 24th, at 2 pm.
Owner Metro Homes is being forced into the sale by its bank, Capitol One, with which Dean Geibel as recently as early November was trying to renegotiate his debt of $22.3 million. At that time, Geibel told  reporters that Capitol One pushed back the scheduled October sale and that he doubted the December 13 sale would take place. Geibel has other construction sites in Hudson County. Last summer a real estate site for the northeast described Esperanza as an upscale residential community in Asbury Park.
In November, City Manager Terry Reidy told Asbury Radio that the city had sent letters to Geibel informing him that he was in danger of losing his waterfront development rights on the site.
Last week the City declared its master developer, iStar Financial, in default. iStar took over, in November of 2009, for Asbury Partners after that group defaulted on loans valued by iStar at $70 million. At the same December 7th meeting, the city council introduced an ordinance to borrow $250,000 to fund future litigation costs. 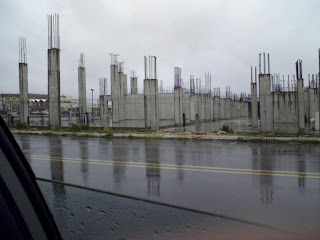 The Esperanza sheriff's sale will take place at the Hall of Records, 2nd floor, in the county freeholders' meeting room, in Freehold.
Posted by Maureen Nevin at 12:19 PM