Please come out and join my friends and I for an afternoon of words, stories and laughter - 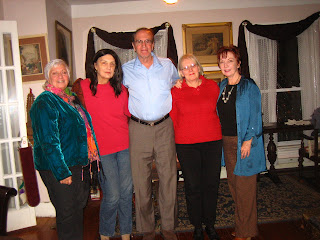 THE JERSEY SHORE WRITERS WILL READ FROM THEIR WORKS AT JERSEY SHORE ARTS CENTER, NEPTUNE -- SUNDAY, JANUARY 16TH from 2 PM to 4 PM
Local writers will come together for an afternoon of readings, discussion and open mike. Most readers are members of the TriMuse, a writers group from Ocean Grove, founded by Carol MacAllister, Gayle Aanensen and Pat Florio, all of whom will be reading. Program coordinator for the newly established Jersey Shore Writers, the host organization, Katheryn White (a TriMuse member) will moderate the event with Ocean Grove resident Pat Dosky. There is no charge for this event. However, donations for the Jersey Shore Arts Center Culinary Project for the Visually Impaired, will be appreciated.
The Jersey Shore Arts Center is the former Neptune High School, masterfully restored by Herb Herbst and his friends and relatives. A beautiful job, the building alone is worth the trip.

The Scheduled Readers include:
1. GAYLE AANENSEN reading from her new novel, “Summer of the Suffragists.”

Her first novel, “The Little Rough Riders at the Jersey Shore,” which takes place the summer of President Theodore Roosevelt’s visit to Ocean Grove in 1905 has sold hundreds of copies. Aanensen, an Ocean Grove resident, has a background in writing and editing for three national magazines and was a co-founder of Tri-Muse, which published two anthologies “Writers on the Water’s Edge” and “For Chocolate Lovers.”

2. PATRICIA FLORIO will be reading a chapter called “The Journey” from her memoir, entitled “My Two Mothers, a Memoir.”

Florio , a co-founder of Tri-Muse, is an Ocean Grove resident who received her MFA from Wilkes University. She is published in major newspapers throughout the tri-state area including travel articles for Examiner.com (www.examiner.com/x-24209-Newark-Destinations-Examiner) and Striped Pot Travelzine. Her published work includes writings in “Writers on the Water’s Edge” and “For Chocolate Lovers.”

3.CAROL MACALLISTER will be reading from “RIPASSO,” an invitational collection of poetry and a short piece from “God Only Watches.”

MacAllister, a co-founder of Tri-Muse, is an award-winning writer who holds two MFAs; fine arts and creative writing. She has edited four successful publications. “God Only Watches,” an historical novel reflective of the 1850’s NYC and New Brunswick, NJ, is currently under consideration with a NYC agency.

4. CHELLE MARTIN will be reading a portion of a short story she wrote which is a satire on Cinderella.

Martin, an Avon resident is an award winning writer, whose works have been published in numerous mystery anthologies. She’s a member of Mystery Writers of America, Sisters in Crime, Romance Writers of America, Short Mystery Fiction Society, and the Cassell Network of Writers.

5. MAUREEN NEVIN will read from “Expat,” her novel in progress.

6. RICK PORESKY will read “Rafting the Fatal Flow,” from his memoir “Memories of a Wandering Jew Muddling Through.”

Poresky is a family therapist in Toms River and Brick, who resides in Toms River with his son Ben. He has traveled the world including Lagos, Caracas, Kathmandu and Aceh.

7.CONSTANCE WAGNER will read “Winter’s Bride” and other short poems from her collection of fantasy-themed poetry.

Wagner is Director of the Writing Program at Saint Peter’s College, Jersey City, NJ. She is a writer, editor and Tolkien scholar currently at work on a book about sacrificial heroism in “The Lord of the Rings.” A collection of her fantasy-themed poetry, “Winter’s Bride and Other Songs of Faerie,” is projected for a Spring 2011 release from White Light Press.

8. KATHERYN WHITE will read with Garrett Lardiere from her latest play, “Star Dust, A Love Story about Cancer.”

White is a Professor of Writing and Theatre at Saint Peter’s College. Her plays have been produced Off Off Broadway in NYC, the Edinburgh Fringe, in Scotland,

Edward Albee’s festivals in Valdez, Alaska and Omaha, Neb. In NJ her plays have been produced by The Black Box of Asbury Park, and at the Bell and Barter Theater. Her play “Sentimental Journey,” premiered at the Jersey Shore Arts Center in 2002. Her book, “Collected Plays by Katheryn White,” published by White Light Press is available through www.Amazon.com and www.lulu.com.

There will be a break after the readings followed by an Open Mic segment limited to five minutes a presenter. Writers will have their books available for purchase.
Posted by Maureen Nevin at 3:46 PM