Meeting the Lawyer Who Bankrupted the KKK

Morris Dees founded the Southern Poverty Law Center (http://www.splcenter.org/) 40 years ago. I've admired him and his organization for more than 25 years. Not quite over major surgery, I traded makeup time and other such vanities in order to schlep into NYC Wednesday night last week. A scary sight. My hope was just to catch a glimpse of Morris. Lucky me I found a seat 4 rows behind him. He was charming!

The son of Alabama tenant farmers, Dees, was educated during the 40s and 50s in a tiny school house. He grew up sharing his meals with the children of other tenant farmers, who included many blacks. As he grew up, Dees couldn't reconcile the institutional racism around him. It seemed to him the only thing worth doing was trying to avenge the injustices committed by extremists of all traits. For many years, AsburyRadio has had a link to the left of this blog - Tolerance.org - which is one of the many services of SPLC. 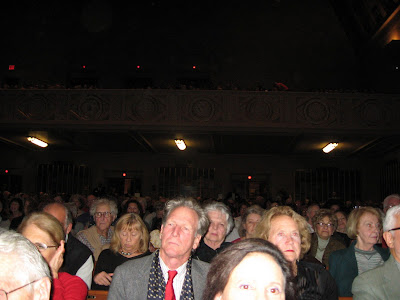 This shot doesn't do justice to representing the packed house at the gigantic Schaffer Forum of Congregation Rodeph Sholom on W. 83rd. The balcany, barely visible in this photo was also packed.

Among the moving stories we heard was the brutal murder of two police officers by extremists Joseph Kane, 16, and his father Joe. Police officer Brandon Paudert was identified by his father, Police Chief Bob Paudert. SPLC went to Arkansas to make a training film of the murders to distribute free to law enforcement across the country. To our shock Retired Chief Paudert then took the lectern. 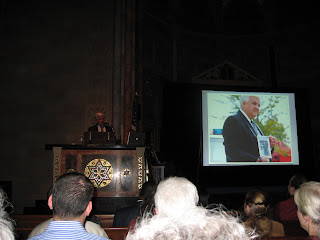 Paudert explained that the first time SPLC called him he made an excuse because he didn't want anything to do with the organization which he'd had pegged as a "commie outfit". Now he works with them as a volunteer.