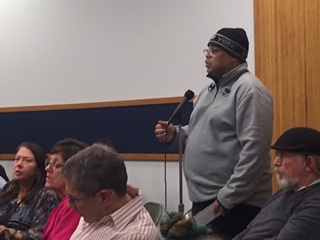 Residents had only three minutes each to voice their disgust last night for the nearly 18,000 sq ft private pool club planned for between 6th and 7th avenues, right in front of North Beach condos. Two hours later the last speaker finished by declaring the oceanfront "exactly back where we were before" the redevelopment plan of 2002 began. Everything about the master developer's concept irritated every speaker - white, black, young or old, poor or well off - not one liked the proposal.

A developer and builder who said he chose North Beach as his retirement home, described the physical structure of the pool, which features four solid walls, as "a fortress."

"We were told there might be structures of two stories in front of us," he said. But the buffer strip between North Beach and the boardwalk is on an incline so that the ocean side of the pool is higher than two stories. "This Planning Board is our last line of defense," he implored, urging the Board to create "an inclusive place that meets all requirements." 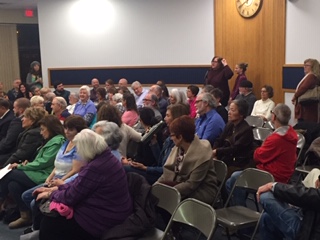 Whites and blacks alike expressed frustration at iStar's apparent lack of empathy in deciding to build the City's first beach side pool in decades and to design it as an exclusive -- expensive -- iStar-owned Asbury Beach Club amenity for its members only. Comparisons were made to the pools built in pre-integration times, such as the former Monterey 'public' pool, which some say relied on social snubbing to make people of color feel unwelcome. The beach itself was once totally off-limits to black residents, with the exception of an untended no-man's-land scrap of sand south of the Casino, where the sewer pipes crossed the shore to the ocean.

During our three minutes, Asbury Radio informed the Planning Board that the NJ Dept. of Environmental Protection's 2004 Coastal Area Facility Review Act (CAFRA) permit [see links] that they are guided by -- the only CAFRA permit issued to date -- specifically restricts structures to places of assembly open to "the general public" and "supports beach/tourism related activities, that is, retail, amusement and food services." The description does not seem to fit a members-only private pool beyond the reach of most Asbury Park residents. AR could find no references to private pools in the 54-page section of the more than 250-page document that deals with those issues.

AR asked the professional planner hired by the group Save Asbury's Waterfront, Carlos Rodrigues, PP / FAICP ( which means he is a Fellow of the American Institute of Certified Planners) of Design Solutions, LLC, for how we should interpret this information.
The answer was far more than I anticipated:
"The CAFRA permit does not anticipate a private club – only public clubs," Rodrigues responded via email.
"The applicant’s attorney will argue that the Planning Board has no jurisdiction over the CAFRA permit, only NJDEP.  However, if the town does something that puts that permit at risk, then redevelopment would also be at risk. So the Planning Board should take it seriously." 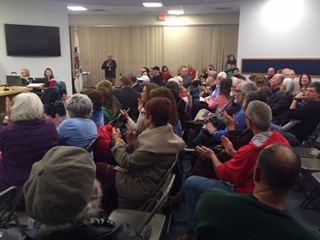 Teretha Jones, a native of the City whose family owned a business here, told the Board to "Throw the whole plan out!" Declaring the City to be 75 percent "her people," Jones said, "the City is more segregated than before," staining the City's era of redevelopment with the racist attitudes of the 50s and 60s. "You didn't even want to include my family business in your incubators." In those decades, she also noted, Asbury Park was a center for KKK rallies.

Rev. Alison Estes, a 24-year resident, acknowledged a need for healing. Katherine Healy, a new mother of a son, lamented "how racism is built into our society today." And, she added her concerns for better stewardship of the coastline, "New Jersey is ground zero for the effects of climate change," she said.

"The onus is in your hands," said Joyce Grant, an environmental columnist whose view from her Asbury Tower window chronicles a daily devastating excavation. Where a wide boardwalk once stood, heavy construction equipment rakes, scoops and dumps dunes and shore grasses onto mountains of dirt. Her message to the board was simple and short: "I implore you, reject this environmentally irresponsible project." 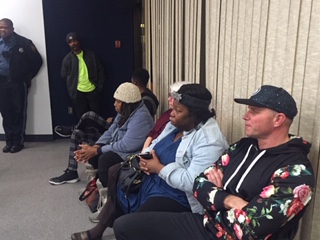 Duanne Small, a contractor and lifelong city resident, described earlier times of exclusivity when he would've had to carry proof of work in order to cross from the west- to the east-side of the City, and leave before dark. Today, Small said, there is a 30 percent unemployment rate among 18 - 30 year-old residents of color in Asbury. A former charter study member who worked successfully to change the City's form of government, Small complained that a meeting planned with an iStar manager has brought little relief and prodded city officials to take a stronger role in getting the developer to use local labor. "Power concedes nothing without a demand," said Small in closing on his three minutes with the Frederick Douglass quote. "It never has and never will."

Arlene and David Levenson, of North Beach, a 160-unit community, noted last week's revelation from an iStar engineer charged with analyzing storm water management of the pool. In draining and during weather events, when the adjacent Deal Lake would receive the bulk of runoff from the 74,800-gallon capacity pool, the Deal Lake Commission monitors and adjusts the depth of the lake through a flume system. Yet iStar's mechanical facilities engineer, Sean Delaney, told Asbury Radio last week that he has never contacted the DLC, or consulted its engineer, Peter Avakian.  David Levenson related the horror of seeing Superstorm Sandy literally push in the great front doors of their North Beach home that is directly behind the site planned for the pool.

The Planning Board Chair thanked the participants for their comments, on which she said board members had taken notes in order to review later.  The board's vote was moved forward to February 24th, when she said some speakers may be asked to clarify or expand on their information. The 2004 CAFRA permit is linked to this report. Please see page 10 for the passages quoted here, as well as other mentions of venues for the general public.

Posted by Maureen Nevin at 1:47 AM