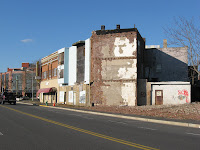 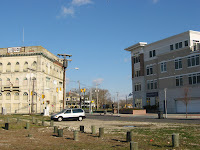 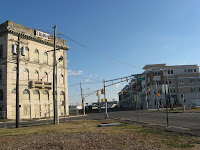 A City code official confirmed today that owners of the historic Charms Building, pictured here across from the newer Wesley Grove condos, hold a permit for asbestos abatement. The process is a requirement whether it's a prelude to repair or demolition of the building.
The permit was extended today to 12/31/09.

Code officials did an inspection nearly three months ago. "We've been citing it for awhile," the official said. Calling the building at 401 Monroe Avenue a "hazardous structure," he said, after years of neglect restoration would only be possible at an "astronomical cost."

Separately another City official noted that any building can be renovated, it's just a question of money. He added that the loss of tax revenue to the City is also a serious consideration. The City's Historical Society placed the building on its endangered list and called for the City Council to move to preserve it. Deputy Mayor John Loffredo has vowed publicly on a number of occasions that he would find a way to restore and preserve, the 1914-circa building, which was built to house an Elks Lodge and later accommodated the candy company's offices.


The City has lost a significant number of ratables since the master developer, Asbury Partners, began buying up properties and leveling the structures on them, known as improvements for tax purposes, in order to appeal and lower their property taxes, starting from the time it signed the Waterfront Redevelopment Agreement (WRA) with the City in 2002.

It was unclear what interests if any iStar Financial, Asbury Partners' lender which plans to offer at auction the master developer's $70 million-dollar interest in the partnership on December 15th, might have in the landmark building or cleared property.
Also pictured above are a series of blighted buildings on Cookman Avenue leading into the downtown.
Posted by Maureen Nevin at 9:32 PM

The Charms Building is a beautiful piece of architecture and could be restored at great expense. It would be a tremendous asset to our community. As most developers would tell you they would rather tear down and rebuilding something "just like it", I hope that Asbury Park council would make tremendous incentives to get a talented developer to restore this building.